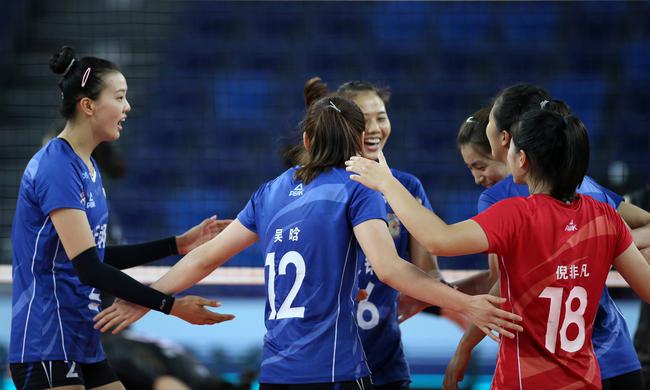 The 2020 National Women's Volleyball Championship entered the knockout round today. In the 8-to-4 contest, the battle between Shanghai and Liaoning, an established powerhouse, is the most visible. Jiangsu will face Sichuan, Tianjin and Zhejiang and Fujian will challenge Shandong. These three quarter-finals have relatively little suspense. The more skilled Jiangsu, Tianjin and Shandong will advance to the semi-finals with bright prospects.

Liaoning did not perform well in the group stage, only ranked third in Group B, and was forced to face Shanghai, who ranked second in Group A, in the quarter-finals. In the competition to reach the top 4, the battle between Shanghai and Liaoning is the most interesting. Although Liaoning's lineup is not as perfect as the opponent's configuration, but in the last round of the group stage, it has just experienced a hearty victory in the battle of life and death. The players are better mobilized, which may bring a greater impact to Shanghai.

The Shanghai and Liaoning teams in the current championships have completely different trends in the group stage. Shanghai, with the majority of veterans, has a balanced offensive and defensive performance and a strong overall performance. The performance is relatively stable and only lost one game; Liaoning, which is mostly dominated by new players, can't pass hard and has poor side offensive ability, and almost out of the ups and downs. With the current lineup of both sides, the strength of the Shanghai team has a certain advantage.

There are frequent loopholes in the first pass of Liaoning in this championship. Whether it can withstand the impact of Shanghai on the serve is the key to challenge the opponent. Now Liaoning not only fails to pass the main attack, but even the free man Miko Miko is often caught in the embarrassment of Lianfeiyi. The team's poor pass makes it difficult for national player Ding Xia to fully make up for it. Keeping the lifeline of the pass is the key to improving resistance in Liaoning.

Shanghai is fast, has many tactics, and the attacker's personal tactics and on-court insight are better. Faced with such a seasoned opponent, the block led by Liaoning national player Hu Mingyuan will face a test. Whether she can personally contain the breakthrough of Zhang Lei and other veterans is worthy of attention. The setters Bian Yuqian and Ding Xia are both experienced veteran players who have strong control and resilience in the game. The competition between the two is also exciting.

In the other 3 quarter-finals, there is a gap in strength between the two sides, and the suspense of the victory is relatively small. Jiangsu, who won the first place in Group A, played against Sichuan, who had won the last eight in Group B. Although Sichuan's deputy attack road and quiet block are more distinctive, it is more difficult to restrict Jiangsu's two major national players Zhang Changning and Gong Xiangyu from breaking through. If nothing happens, the hard-powered Jiangsu Women's Volleyball Team will continue its winning streak.

Shandong, ranked first in Group B, played against Fujian, ranked fourth in Group A. Both teams belong to the teams with scattered offensive points and faster speeds, but Shandong is superior in lineup thickness and offensive personal breakthrough ability. Normal performance should be smoothly promoted. Zheng Yixin, Yang Hanyu and Zhang Qian, new and old national players on the deputy offensive line, are the focus. The competition between the two free men of the national team, Wang Mengjie and Lin Li, was widely anticipated, but Lin Li did not appear in the two games after the group stage. Whether the two can compete in the same field is still unclear.

Tianjin only finished third in Group A with the strong player Rulin, but due to the changes in the situation of Group B, they won a more favorable match in the quarter-finals. Compared with the old enemy Liaoning, Zhejiang is not as good as the old Zhejiang. As long as it withstands Zhejiang's impact on a pass, Tianjin will advance to the top four. With the decline of Zhejiang's strength, the battle between Tianjin and Zhejiang is no longer so eye-catching, but the duel between the two sides' trump cards, Li Yingying and Li Jing, is still worth watching.

The 9th to 13th places have limited attention. Hebei and Henan, which had no wins in the group stage, met, and Henan, which has a high net port, is expected to win the first victory in the championship. Yunnan challenged the host, Guangdong, if it could not restrain the opponent from taking on Chen Peiyan's offensive, it would most likely be defeated again. (Caucasus)